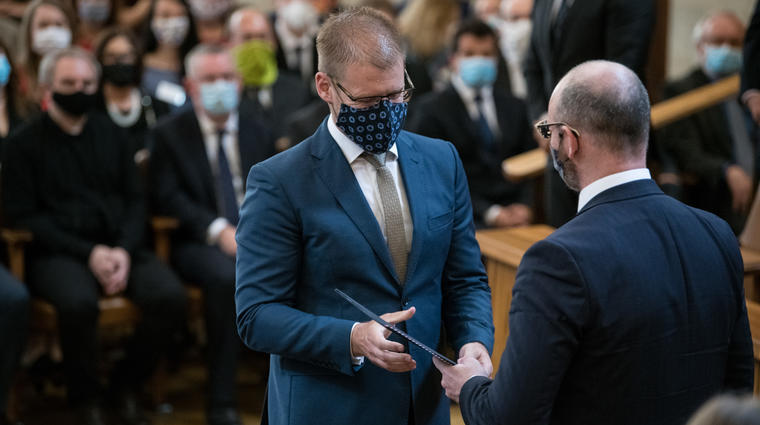 On 2 July 2020, Ladislav Krištoufek from the Institute of Economic Studies received a decree from the Minister of Education, Youth and Sports, Robert Plaga, confirming his appointment as a professor. At the age of 35, he became not only the youngest appointed professor of our faculty but also the youngest professor in the humanities and social sciences at Charles University, at least since 1999, when the statistics of the Ministry of Education, Youth and Sports were launched. Together with him, 79 newly appointed professors received the appointment decrees at a ceremonial act held in the Karolinum in Prague.

Regarding his appointment, Krištoufek himself stated: “The professorship at Charles University is an important milestone for me, especially at the Faculty of Social Sciences and the Institute of Economic Studies, where I was provided with an inspiring and nurturing background.”

Ladislav Krištoufek is the Vice-Dean for Student Affairs at the Faculty of Social Sciences, Charles University, and teaches econometrics and data science at the Institute of Economic Studies.

From August 2014 to February 2015 he held the position of researcher at Warwick Business School in Great Britain in the team of Professor Tobias Preis, in 2011 he undertook a short research stay at UC Berkeley in the USA with Professor David Zilberman. His research activities are very diverse and cover topics from financial econometrics, through energy finance and economics, interdisciplinary economics and finance, to cryptocurrencies and machine learning. He has published dozens of impacted articles with a strong citation response; currently with almost 1,700 citations and an h-index of 23 (according to the Web of Science), he is one of the most cited researchers in the social sciences in the Czech Republic.

The title of professor is the highest academic degree. The professor is appointed by the President of the Republic on the proposal of the research board of the university submitted through the Minister of Education. In the procedure for appointment as a professor, the teaching and scientific or artistic qualification of the candidate, who is a prominent and recognized scientific or artistic personality in his/her field, is being proved.