With Student Clubs to Water, Culture and Lectures 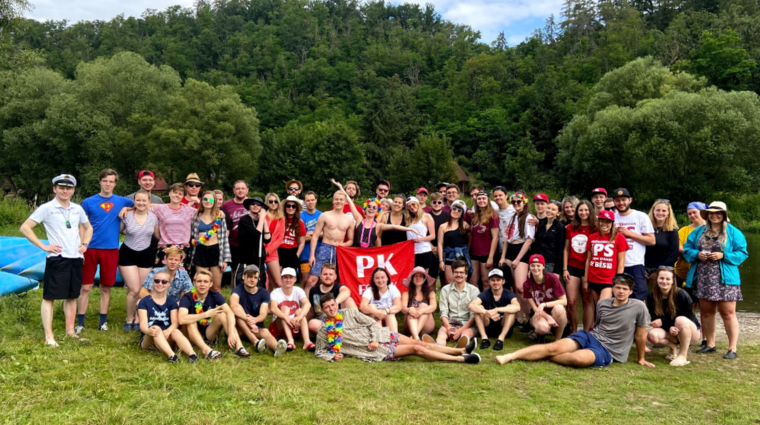 With Student Clubs to Water, Culture and Lectures

Student clubs at FSV UK are an integral part of life at the faculty. How did they deal with the coronavirus crisis, what are they doing during the holidays and what events are they planning for you in the upcoming months?

During the crisis, the Miroslava club from the Institute of Sociological Studies of FSV UK decided - in cooperation with the organization Nevypusť duši (Don’t go bell-up) - to share tips and advice on how best to combat possible anxieties. They published a series of articles on social networks - ISS vs. COVID - where the ISS teachers share their views of the coronavirus crisis, the changes today’s society is going through and the consequences the pandemic will have on our society. They also shared tips on how to handle a video conference and posted a breakfast video to compensate for the missing traditional student breakfasts. These days they are preparing a holiday Sociovoda (Socio water) and in the next semester they are looking forward to seeing you at traditional Lectures by the Wine, in the Sociokino (Socio cinema) and other club’s events.

At the beginning of the summer holidays, the Political Science Club of FSV UK set out on water - the sixth year was attended by 62 people who went 62 km down the Berounka River. During the quarantine, the Political Science Club tried out holding online debates. One of them addressed the possibility of volunteering during the coronavirus crisis. War reporters Markéta Kutilová and Lenka Klicperová were invited to some other debates. The online debate on the effects of the pandemic from the point of view of social sciences or the debate on the current situation in the USA are also worth mentioning. Their first offline debate was about life in the Democratic People’s Republic of Korea. During the holidays, political scientists will also undertake a cycling trip. In the winter semester, the traditional IPS get-together trip awaits them; at the end of September, they are planning a debate on the reform of Czech education, which will also be attended by the Czech Minister of Education - Robert Plaga, or a debate on the US elections. Of course, student parties can’t be missing in the programme.

IKSŽ students tried to revive life at the faculty mainly by organizing cultural events. Together with the “Na Hollaru” café, they prepared “Kino na Hollaru” (cinema at the Hollar) for their colleagues - showing the documentary “V síti” (In the Network), including a debate with director Vít Klusák, an opening exhibition of paintings by Beata Kurucz and 7 different music events. A total of 22 producers and DJs, two bands, several rappers and Tea Sofia, the winner of Czeching of Rádio Wave, performed at them. They are preparing a new part of the popular debate series Shit Happens, where guest speakers talk about their problems on the road to success, as well as other cultural events. In cooperation with other clubs, they are planning to organize an ecologically focused Let’s Care event at the end of the holidays.

E-klub, the student club of the Institute of Economic Studies, does not stay idle either. Due to the high interest in the already legendary VodIES event, during which students go down one of the Czech rivers, this year the organizers decided to offer even two dates, which will be attended by a total of almost 120 students. During the summer, sports-minded students can regularly take part in football, frisbee and volleyball tournaments with the E-club. The chairmen of the E-club are working on the preparation of the E-GO get-together trip for students entering their first year of study. Everyone from the E-club firmly believes that at the beginning of the new semester they will return to the standard regime and, in addition to sports events, they will also hold social and educational events. So you can look forward not only to the party, but also to a number of lectures, workshops, games and trips.

The Students’ Self-Government of IMS (known as SIMS) organized its historically first online IMS Quarantine quiz during quarantine and, in mid-July, IMS voda (IMS water) event on the Ohře River. SIMS students firmly hope that in the new semester they will be able to organize a get-together trip for first-year students, a postponed get-away session (i.e. a get-together trip across all the years of study) and a traditional IMS sports tournament. Together with other clubs, they will take part in the events to celebrate November 17 and organize the FFSV Day (faculty’s sports day in cooperation with the Faculty of Arts, Charles University). The upcoming events include the Teritoriální kino (Territorial cinema), which shows thematically focused foreign films, as well as popular pub quizzes and karaoke.