Interview with Martin Gregor, the Director of IES FSV UK

With the Director of the Institute of Economic Studies, Martin Gregor, on his journey to economics, research projects, events at the institute and job placements of his graduates. 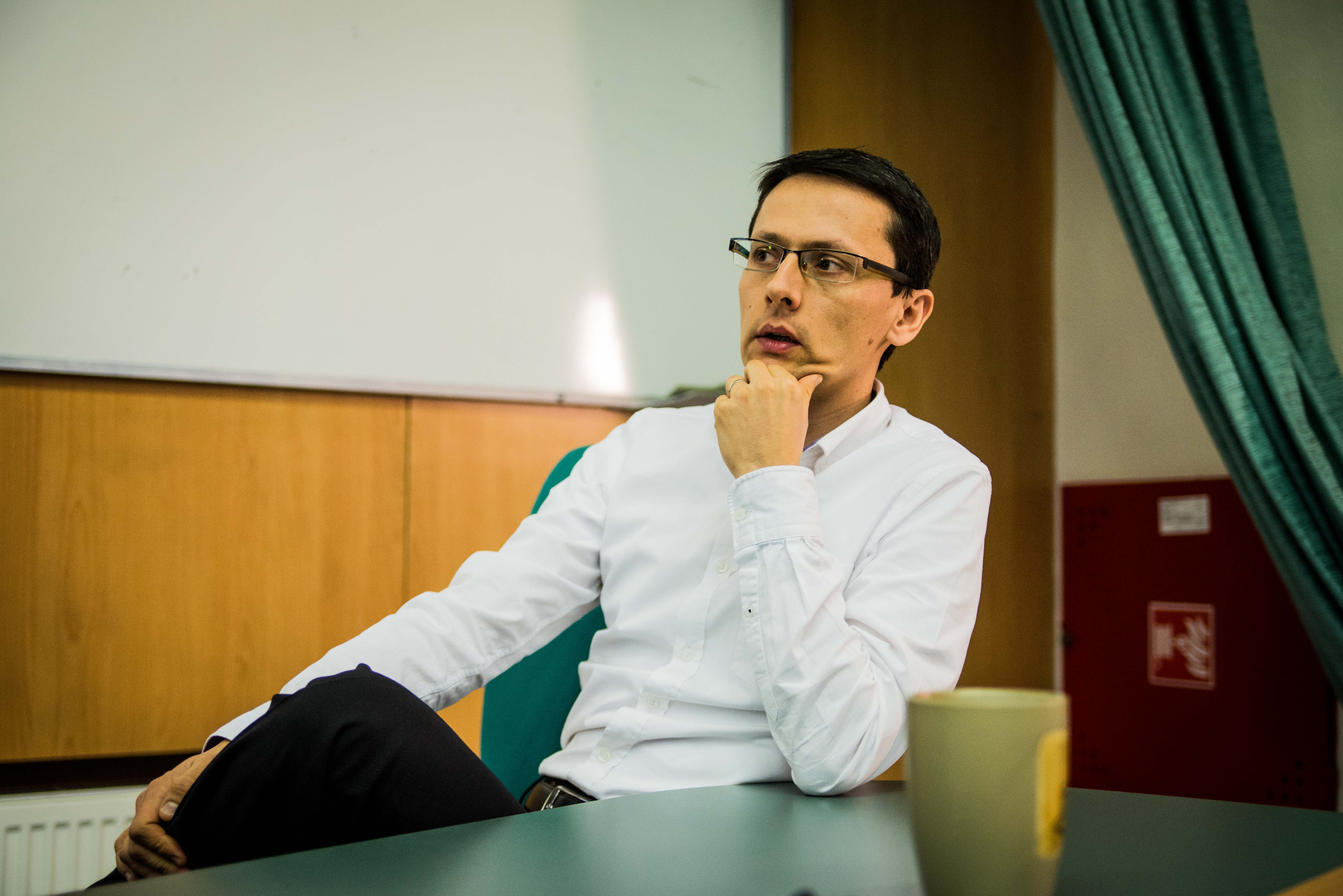 Was it for you a direct path to economics?

Certainly not. In high school I always enjoyed mathematics and logical thinking, which is actually alpha and omega of success in economics. I participated in mathematical olympiad, programmed computer games in my free time, and just for fun I also tried the official IQ test with the result of 148. At the same time, however, I was a typical child of the nineties, fascinated by political and social changes. That is why I first started in political science, where I gradually made it to a rigorosum procedure.

When did you decide to fully dedicate yourself to economics?

I realized right in the first year, when I was taking part in a joint Introduction to economics and was the best non-economist in the course, that I needed a little more numbers and formally correct reasoning than what the courses in political science could have offered to me at that time. So I soon began to study economics simultaneously, where over time I profiled myself into the field of applied microeconomic theory.

What do you consider to be your greatest academic achievement?

I am proud of all the works I have been able to conceive from scratch and without the help of any supervision, to mathematically prove them and sell them in a harsh global academic environment. In order to do that, the editors of all my major works were professors from American universities, including one Nobel Prize winner.

However, I am constantly working on other topics at the highest possible level, because without active involvement in world research, it’s impossible to operate towards students and younger colleagues at the school of our type.

What projects are you currently involved in?

I have two bigger projects going on that I enjoy very much and which I think have the potential to be engaging.

The first one deals with grades and testing at universities. I try to explain what the grades look like in elective courses when their teachers compete for students by means of attractive grades. First of all, it is an interesting intellectual challenge for me and an effort to bridge two types of formal analyses that have been separate so far, namely the analysis of optimal structures of grades and the analysis of optimal strategies in the competition for consumers.

I admit that this use of grading did not cross my mind. And is it more the case of domestic schools or do we face this phenomenon abroad?

Both. We can say that there is quite a lot of interest in this topic worldwide. At present, especially at universities, we are noticing a trend to constantly improve the grades and at the same time it is not clear how to effectively face it. For example, Princeton pursued for several years a policy aimed at lowering the grades (the share of A‘s could not be more than thirty-five percent). It has recently ended this policy, though. My ambition is quite broad; I demonstrate how different regulations of grading affect the distribution of grades and how they allow for inflation of good grades.

It is also relevant to our faculty - with the recent introduction of mandatory point bands for individual grades, I clearly feel the pressure to change the testing system so that the points are rather just above the threshold than right below it. By the way, the introduction of the ETCS grading also raises the question of whether to regulate distribution directly; following the recommendations by the creators of the ETCS system, A and B grades should be received by a maximum of thirty-five percent of students and D and E grades should be received by a minimum of thirty-five percent of students.

And your other project?

It addresses the decision-making of boards of directors and the composition of executive and supervisory bodies. In this project, I have already received feedback from the experts from Europe and the United States. In June, I will present it at a workshop in Zurich with people from American universities, including MIT, Wharton, Columbia, Carnegie Mellon, UCLA, etc. Basically, I show that strict regulation of links between the members of these bodies, which has been a trend of recent years, can be counterproductive.

What do you consider to be the greatest benefit of studying at your institute in comparison to other economics-oriented universities?

Definitely its international character, we have professors from Oxford, Cambridge and other schools. Furthermore, a very stimulating environment with a wide range of clever and friendly classmates. In addition, an incredible number of possibilities of one’s own development through different opportunities beyond the study itself, be it team competitions, specialized internships, competitions with one’s graduation works or work for the E-club. And last but not least, the emphasis on quantitative bases without which economics - and, basically, any other science - would be lost.

Our institute is also specific in that many of our bachelor’s degree students go abroad, especially to England, Switzerland and the Netherlands because they know they are comparable, if not better, with other Western European students. They will then find jobs globally.

This brings us to the question of job options of your graduates in general. Where do they most often head for?

The vast majority of people work in the private sector at different analytical positions that require smart heads, counting, and nowadays also programming. Traditionally, the financial sector has taken the lead, but I would say that today it is not so much about the sector as about data and analytical capabilities. These are needed by everyone. In addition, there is a wide range of other options, from central bank positions, development of startups to academic work. I recommend you to check out our Graduate of the Month section on our website where we post inspiring interviews with many of our graduates. It's always a very interesting reading.

What is the position of IES in public space?

Nowadays, the so-called “public and media space” is often – unfortunately - very vulgarized and rational reasoning, therefore, commands to devote one’s energy rather to those who want and know how to listen. My colleagues are thus influential primarily in professional associations, or they communicate directly with the framers of economic policy.

For example, our students have traditionally been involved in the formation and analysis of strategic documents prepared by prof. Mejstřík for the government within the National Economic Council of the Government (NERV).

And what are currently the activities of your experts directed outwards?

The traditional and mutually beneficial link is towards the Czech National Bank and it is not just about analyses of monetary policy, but nowadays also an analysis of financial stability and topics of financial regulation in general.

What events are you preparing at the Institute for the near future?

In May, students can look forward to a visiting Professor Colak from Finland, who will talk about fintech and blockchain. Professor Colak holds a doctorate degree in finance from the United States, taught for a long time at the Florida State University, and the course he will give us is one of the most popular ones in Helsinki. Since we have quite experienced academics in this area and our students are active in this area as well, I expect a very interesting exchange of experience.

What are you preparing for your students in the following academic year?

As every year, the best possible classes, interesting topics for graduation theses, and mediating plenty of other opportunities, be it team international competitions or internships in top companies.

In particular, students can look forward to our new effort to focus on the health sector’s economy, which is an area where economists have a lot to say and can improve a lot. Specifically, in September, prof. Stavrunova from Sydney is coming to lecture on the introduction to the economics of health care. Then we will open a new Master’s course in econometrics in health care spearheaded by a new colleague, dr. Bertoli, who publishes in leading world journals on the topics from the economics of health care.

How do you manage to combine your work and personal life?

As a father of three children, whose significant other was once a member of the national teams in three sports, I do not have it that easy. But at the same time I think that who has no children has no motivation to work. At the IES, by the way, a population explosion is a pleasing standard; many colleagues have three or even more children. With a little bit of exaggeration, I would say that we are solving the shortage of skilful students by making them ourselves (laughs).

And the final question. What activity helps you most to clear your head and relax from all your work activities?

It is a well-known fact about me that I like running in nature, especially orienteering, and in the wildest nature whenever possible. So when I get stuck in the moss and blueberries and there is only a rustling forest around me, I am almost there in the feeling of absolute freedom.